​With todays weather being very nice (ie. Not raining) it was a pleasure to get changed into caving kit in the parking area. Not sure if it was the weather or the cave, but the club had a good turn out today with 12 cavers, so we had to organise two independent trips. Our team was Barry, Adam, Karol, Billy, Will and Steve P, and although we all walked up to the entrance together, our team entered first and got moving.  Through the entrance series and into the Brickyard, taking the high route. Then once at Gnome Passage we travelled slowly to admire the formations as a few of our team had not been into this cave before. Next came the start of Edwards Shortcut which started low and we soon came to the 2m drop, but making our body’s wide we were all able to slide down steadily. This was soon followed by the traverse over the deep holes, so out came the rope and Steve P was the first victim to make the crossing whilst being belayed, once he was over he secured the rope to a large jammed boulder while we secured the other end as well, making a traverse line for the rest of us to cross. Adam was the last person cross with Steve P belaying for him form this side. We were then able make more progress along Edwards Shortcut. Then we were at a large boulder choke with water falling, here we took a slight detour to visit the Frozen River before resuming our trip past the Rose Garden and then down to Shatter Pillar. Here we then headed into Cross Rift and turned right following it all the way to Midnight Chamber and The Skyhook (we must bring some SRT kit and a rope and ascend the Skyhook at some point later this year). Anyway from here we made our way back into Cross Rift exploring a few side passages on route, about half way along we stopped and had a bit to eat and drink before continuing again to the far end of Cross Rift with its very pretty roof. Then after a few turns we were in a low passage before emerging at the top of the 35ft climb out of Maypole Inlet passage, the step over which is sometimes a bit slippery was still rigged from the Rescue, so it was nice to have a rope as a handline. Then we popped out at The Crossroads, instead of entering Salubrious Passage straight away, we headed up the parallel passage for a while before turning right and re-joining Salubrious. Here we had a final food stop before continuing upstream, we then took the shortcut right hand turn and popped out of a hole by the Corkscrew, this we soon climbed and past the Wedding Cake and back to the start of Gnome passage completing our round trip. Just before the Brickyard we turned right again, and over the traverse (where we could hear the voices of our other group) before entering The Big Chamber near the entrance. With the entrance daylight in sight, two of our group exited the cave whilst four of us decided to visit the Mini Columns, so we headed back in and turned right and up the slope and climb, from here we avoided the short muddy direct route and took the longer way around through the two larger chambers and eventually sliding down the narrow hole towards the columns. These Columns are very impressive being so close to the entrance and surface. From here we continued along the passage and then climbed down a rather exposed 9m descent before emerging back out by the entrance gate.
On exiting the cave, we inadvertently appeared as the BBC was filming just outside the cave entrance (To do with the Rescue), they seemed to like this and asked if we minded being filmed, so we had to sign a disclaimer and do a few re-runs. A perfect end to a great trip. 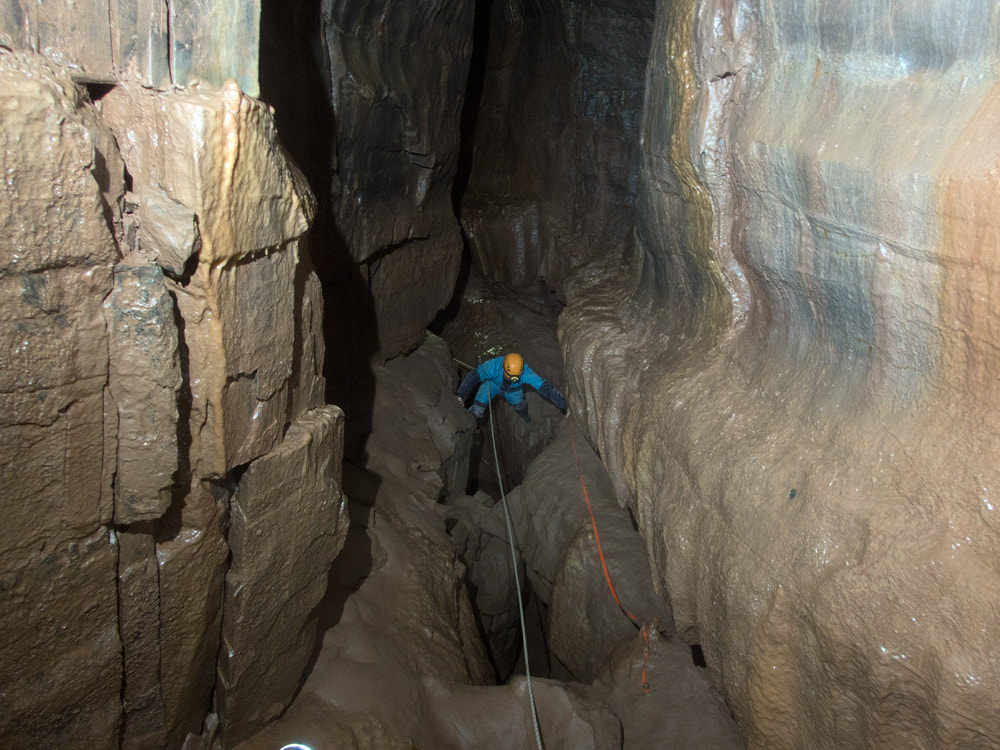 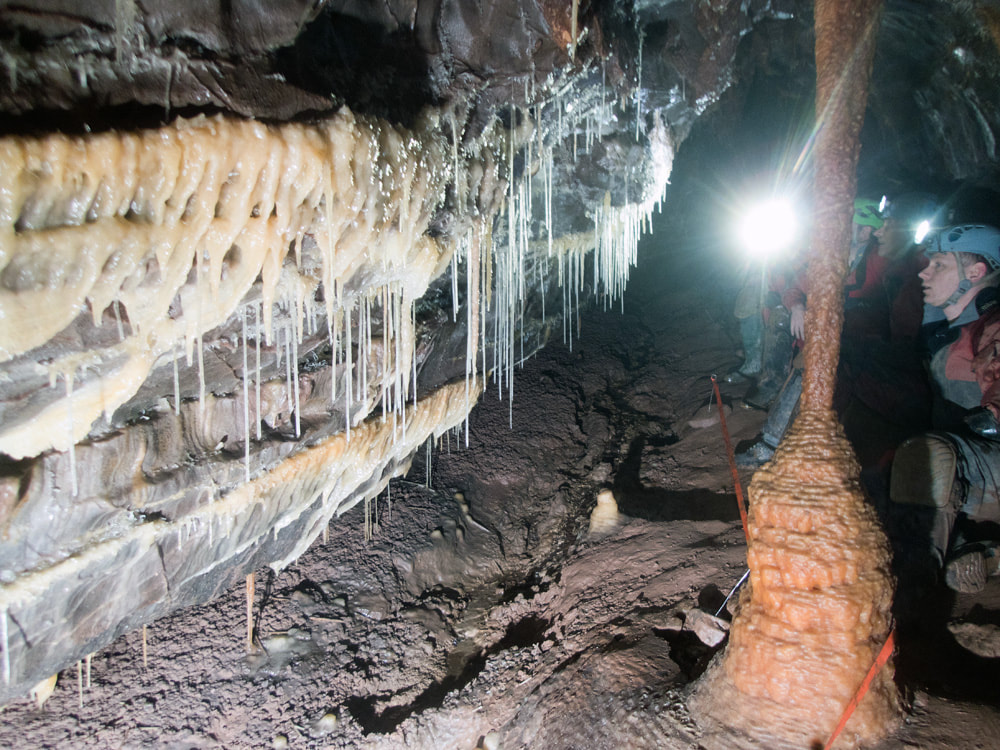 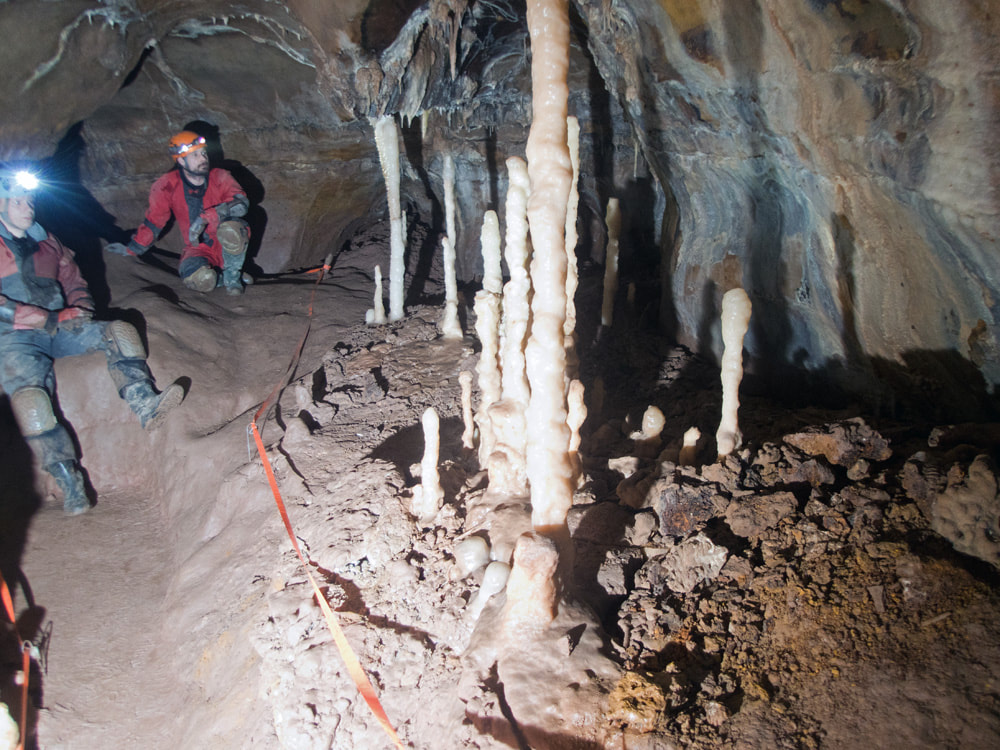 ​With todays weather, caving was the best option. So with meeting up in our now normal parking location, the wind was a blowing with the occasional rain storm making it feel very cold. But we managed to get changed into caving kit in between these storms, once kitted up we headed down to the entrance which was a challenge in itself, with the well worn track and rain making it very slippery. As soon as we entered the cave, the warm flowing air hit us in the face which felt very nice, Steve and Isaac went in first, as they were going ahead in order to set up the first pitch with ladder and lifeline, the rest of us steadily made our way down, I was expecting the water level to be a bit higher at the entrance waterfall which we have to climb down, but it was not too bad at all. Then as we got to the top of the entrance series pitch, Steve and Isaac was ready for us, getting us all down safely, then we moved onto Cairn Junction to fill in the Log book,  This is where the group split, with Steve, Karol, Isaac, Will and Scott heading up to the Waterfall Series whilst Barry, Pauline, Adam and Billy headed in the opposite direction to The Fault Chambers.
Making our was across Cairn Chamber, we then crawled past Wonderbra and into Beer Challenge emerging into White Arch Passage where we turned left. From here it was pretty straight forward passing the White Arch itself before ascending up into Lamb and Fox Chamber. Here the sound of falling water was a familiar sound within this chamber, then we ascended again to the top of this chamber and climbed again to enter the start of Indiana Highway. Here we started to pick up a strong draft, probably more noticeable due to the narrower passage. It did not seem too long along here until it was time to put the cows tails on to complete the traverse with the fixed line. As we exited this traverse and before entering Megadrive we left our cows tails in a corner, ready for our return. So it was now onwards again towards Megadrive where we headed south. Although we were not counting bats, it was quite noticeable that there were a large amount scattered throughout Megdrive including a Greater Horseshoe bat. Passing The Nunnery we were soon at the start of Persererance II which meant getting back onto our hands and knees, once through, we took a look at The Balcony Pitch  down into The Arms Park. Then we retraced our tracks and headed towards The Rift Chambers where we stopped for a drink and something to eat. Then before turning around to make our way back out, we popped  up into the Upper Rift Chamber just to have a look while we were here, we then started our return journey, back through Perseverance II towards The Nunnery. We were now really starting to feel warm and starting to tire, but still managed good progress, Billy took the lead making good dicissions, considering this was his first time in this cave including remembering to turn left half way up Megadrive in order to gain access to Indiana Highway. Then it was time to re-fit our cows tails ready for the traverse line, and continuing back along Indiana Highway before emerging at the upper ledge of Lamb and Fox Chamber. From here Billy was still leading working his way down through the large boulders, past the waterfall, and then had to think about the way out, but he eventually got it, so we proceeded on into White Arch Passage.  Billy also spotted the pillar with the route back into Beer Challenge behind it. With feeling tired, this flat out crawl was hard work, but with a quick rest, we were soon back at The Log Book, where we can see that the other group had already signed out, which is when we heard voices ahead. We then found that Steve and Isaac had stayed at the pitch to belay us out, to which we were very grateful. So with Pauline and Barry ascending first, we then continued heading out, whilst Adam and Billy came up next, leaving Steve and Isaac to de-rig. But by the time we reached the gate we had all regrouped together again. Either we were slow or Steve and Isaac were quick. Then back at the vehicles the cold wind had really picked up in strength. So we decided to go down the road and meet up at the car park in Llanfoist for a more sociable chat and have something to eat. Another great couple of trips today. 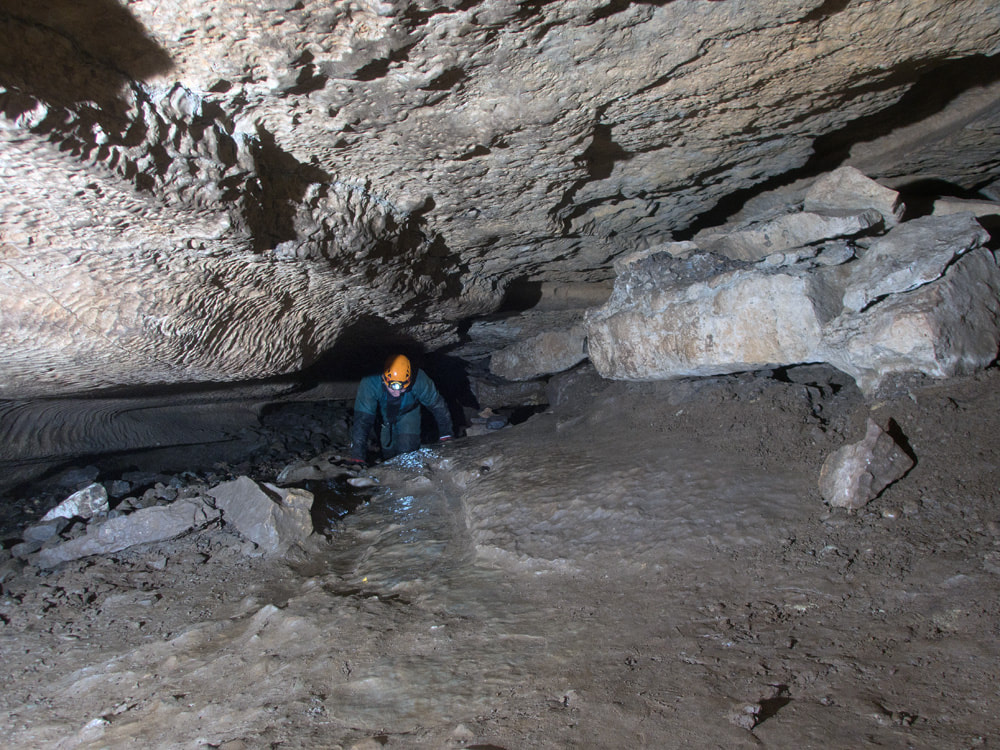 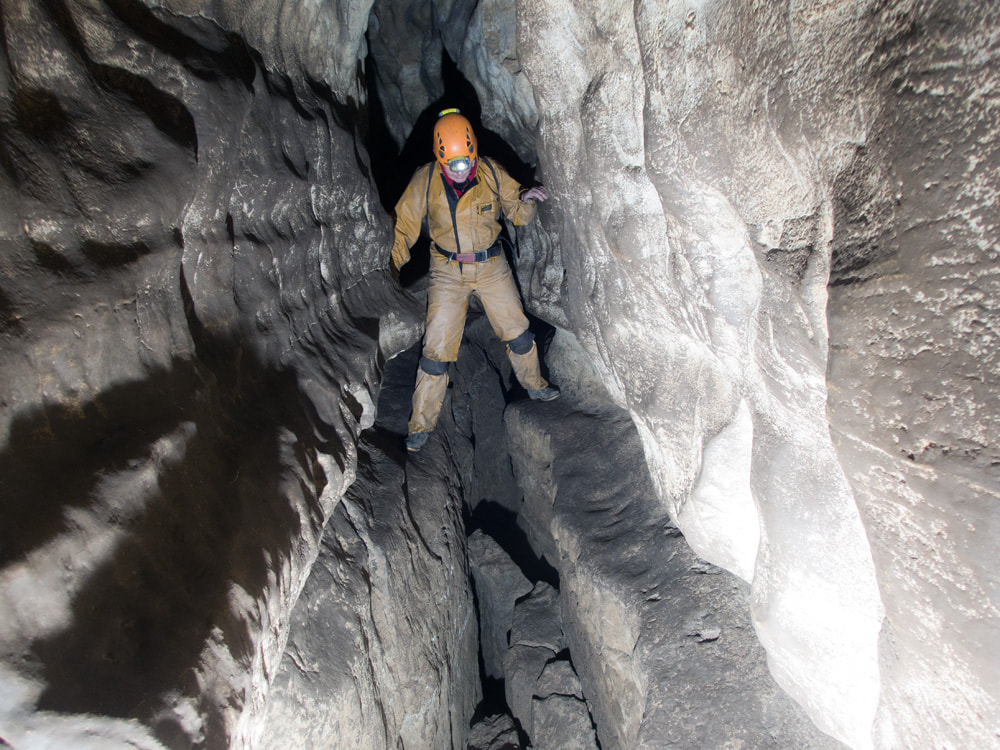 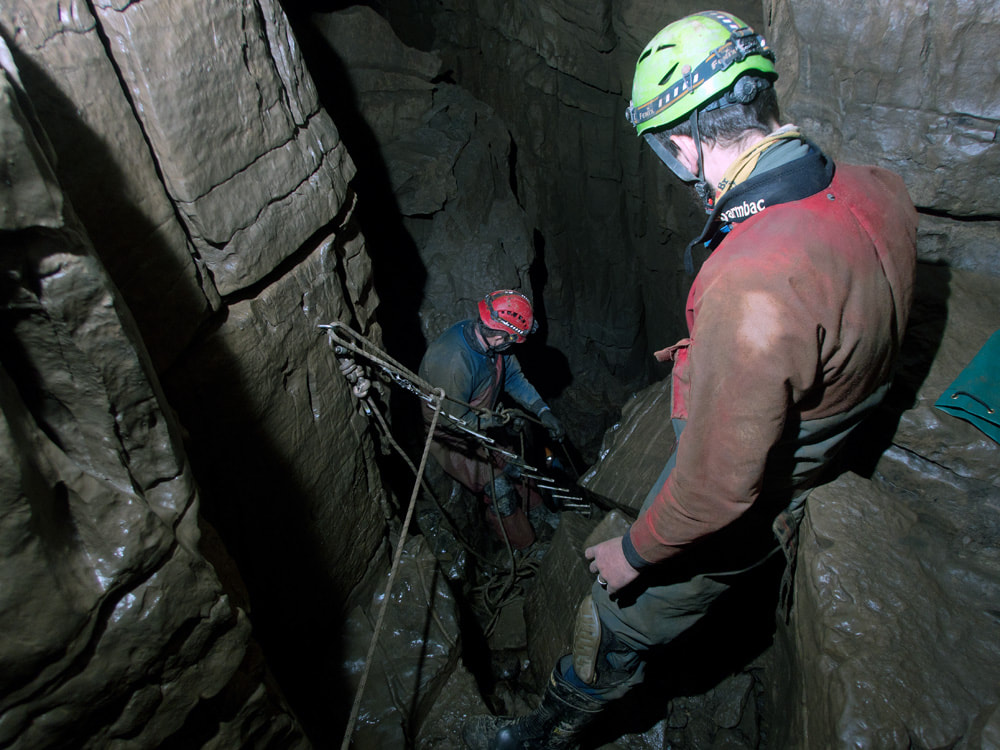